The Isaac Theatre Royal (ITR) was subjected to severe shaking during the earthquakes of 22nd February and 13th June 2011 and sustained considerable damage; this damage was exacerbated by the constant and frequent aftershocks throughout 2011 and subsequent significant earthquake of 23rd December 2011.

The Back of House and Stage House which were newly built in 2004/05, suffered only moderate damage and were repaired, but the 1908 auditorium and 1928 foyer spaces were not considered repairable in their original form, due to the dangerous nature of the original unreinforced masonry walls. It was noteworthy that the structural earthquake strengthening carried out in 1999/2000 prevented complete collapse of the Theatre and enabled the retrieval and salvage of key heritage items and stabilisation of the Edwardian façade prior to deconstruction. All heritage fabric has been retained, restored and/or reinstated.

The design has achieved 100% of new earthquake building code with the original style and finesse of the original “Grand Old Lady” of Canterbury theatre being maintained throughout, but with various technical and design enhancements necessary to provide Christchurch with a world class theatrical experience for future decades in the strongest and safest performance venue in New Zealand.

The ITR has long been the premiere performing arts venue in Canterbury, a region which polls consistently show has the second highest number of attendees at performing arts in New Zealand. A healthy arts sector is integral to a diverse and exciting community. The Isaac Theatre Royal’s rebuild plays a key role in the recovery of our city and region, especially in the performing arts sector, and is highly regarded as an inspirational example of hope in the emotional mind-set of Cantabrians.

The Theatre re-opened on 17 November 2014. The project was significantly more elaborate in design and complexity of construction than originally estimated with the Theatre essentially being rebuilt from Façade to Proscenium Arch. The rebuild and restoration had significant challenges throughout, making it one of the most intricate building projects in the earthquake damaged Christchurch CBD with an overall rebuild cost of NZ$40M.

The Theatre and its block 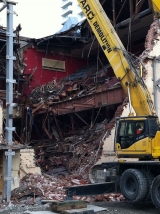 Junk in the orchestra pit 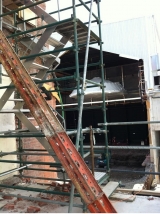 Cocktail Mix in the Gallery Bar

Damage to the ITR Managment Offices 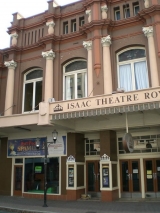 Seats in The Gallery

Inside the cordoned off Red Zone 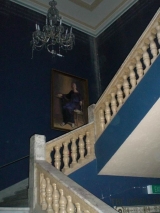 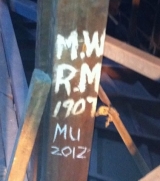 Christchurch CBD from the Air 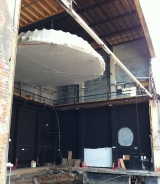 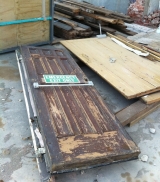 Neil Cox and the Theatre Facade 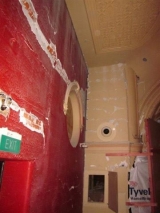 The reconstruction was required to comply with increased and more stringent building standards with respect to increased earthquake resistance, fire protection, egress and accessibility. The heritage restoration of the ITR is extremely important to the city with so many historic buildings already demolished. The restoration team has worked closely with NZ Heritage and Christchurch City Council’s Heritage Team to either preserve or faithfully replicate the original interior heritage fabric so that the historic venue looks substantially the same as it did prior to 2011.

See photos of the Theatre Rebuild.

In conjunction with the repair works, a number of improvements to the services and amenities of the ITR, include:

Restoration of the Dome

The restoration of the original 1908 painted canvas auditorium ceiling dome was a major part of the reconstruction of the Theatre. Years of cigarette smoke and grime, coupled with some weather damage due to the inaccessibility of the Theatre after the earthquakes, mould and singeing from light bulbs made for a challenging restoration.

The project was lead by Carolina Izzo, an internationally renowned, Wellington-based conservator who trained in Florence, Italy, with more than sixteen years’ experience working on earthquake-damaged objects.

See photos of the Dome restoration.

Read more about the restoration in this article from the Christchurch Art Gallery’s Bulletin magazine.