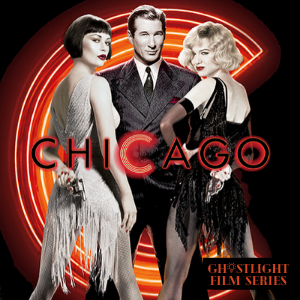 Auditorium
Buy Tickets
Let’s rewind to the Golden Jazz age and follow the story of Roxie Heart (Renee Zellweger) who is on trial for murder. Nightclub sensation Velma (Catherine Zeta-Jones) kills her philandering husband. Chicago’s adroit lawyer Billy Flynn (Richard Gere) is set to become her defense lawyer, who also defends Roxie.
The plot of the film is drawn from the 1926 play ‘Chicago’ by Maurine Dallas Watkins which was in turn based on the true story of Beulah Annan.
So bring your pals to ‘Razzle dazzle em’ break a leg and ‘all that jazz’ for one special night out at the Isaac Theatre Royal!
Film Length: 1 hour 55 min
Rated M for Mature audiences

The Isaac Theatre Royal is excited to bring you our “Ghostlight Film Series’!

A ghostlight is an electric light that is left energized on the stage of a theatre when the venue is unoccupied and would otherwise be completely dark. In the wake of COVID-19, we have had a bit of free time up our sleeves to plan one of our most exciting film screening series yet!

Join us each Wednesday for the next 8 weeks for spectacular themed movie nights on the big screen in the beautiful surrounds of the Isaac Theatre Royal!

We look forward to reminding you of some cult classics and inviting you to sing along and dance to some of the most iconic musicals!

See you at Ghostlight!