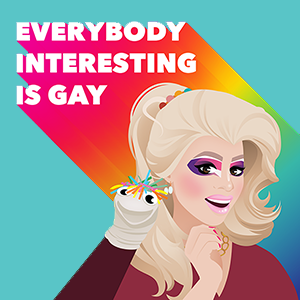 “Everybody Interesting is Gay” is a musical theatre cabaret, composed and written by Jason Smith and Blaise Clotworthy, starring Auckland’s “Queen for the People”, Ms. Wednesday Blaiselle.
Ms. Wednesday takes you on an uproarious journey of musical cabaret, exploring different aspects of rainbow life in 2020.

The show lovingly examines tropes and stereotypes within the rainbow community. Ms. Wednesday gives you a touch of sex-ed, a dose of pride, a hint of advocacy and a whole lotta high kicks.
With nine originally composed songs and a mix of lipsyncs of classic hits, there is something for EVERYBODY to feel INTERESTING and GAY.

The original show coincided with the 50th anniversary of the Stonewall riots, a catalyst for the Gay Liberation and Pride Movement. Hennny Productions in association with Ending HIV and Isaac Theatre Royal, is thrilled to bring you Everybody Interesting is Gay for Christchurch Pride Festival 2020.