The first rule of this Ghostlight film screening is, you can’t talk about it…

Rewind to 1999, a discontented white-collared insomniac (Edward Norton) who is feed up with his capitalistic lifestyle, forms an underground fight club with Tyler (Brad Pitt) , a careless soap salesman. Norton soon becomes embroiled in a relationship with Tyler and a destitute woman, Marla Singer (Helena Bonham Carter). The Fight club project soon spirals down into something more sinister…
Directed by David Fincher, Fight Club is a must see cult classic based on the 1996 novel of the same name by Chuck Palahniuk.

The Isaac Theatre Royal is excited to bring you our “Ghostlight Film Series’!
A ghostlight is an electric light that is left energized on the stage of a theatre when the venue is unoccupied and would otherwise be completely dark. In the wake of COVID-19, we have had a bit of free time up our sleeves to plan one of our most exciting film screening series yet!

Join us each Wednesday for the next 8 weeks for spectacular themed movie nights on the big screen in the beautiful surrounds of the Isaac Theatre Royal!

We look forward to reminding you of some cult classics and inviting you to sing along and dance to some of the most iconic musicals!
See you at Ghostlight! 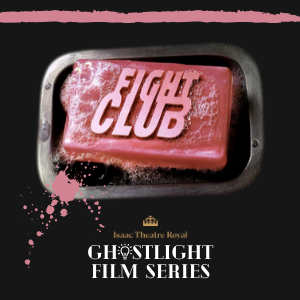