‘Beautiful songs… Nobody but Prine could write like that.’ – Bob Dylan

‘Prine looks for transcendence through the mundane… and uses aging and the creeping passage of time as his vehicle.’ – Marlon Williams

‘He’s so good, we’re gonna have to break his fingers’ – Kris Kristofferson

Frontier Touring and Love Police are thrilled to announce a tour by one of the USA’s most remarkable songwriters: two time Grammy winner and master storyteller John Prine. Prine was recently named Artist of the Year at the 17th annual Americana Honors & Awards, held at Nashville’s famous Ryman Auditorium, and also landed a nomination for the USA’s prestigous Rock and Roll Hall of Fame.

For this special tour, Frontier Touring has teamed up for the very first time with Americana lovers Love Police, responsible for bringing some of the biggest names of the genre down under for two decades now.

Joining John as special guest at all shows is Kentucky singer/songwriter Tyler Childers, who released his breakout debut Purgatory in 2017 and recently played Chicago’s Lollapalooza festival and supported Jack White in Minneapolis. Steeped in the sounds of the Appalachian South, Childers’ debut is bluegrass-infused, semi-autobiographical tracks co-produced by Grammy winners Sturgill Simpson and David Ferguson. Says Rolling Stone of tracks such as ‘Whitehouse Road’, Childers’ music sounds like, “A raw look at the darker regions of modern-day Appalachia, where bluegrass is in the soul, but cocaine is in the blood.” 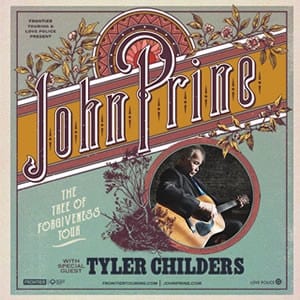