Showbiz is hosting a music theatre night where the audience requests its favourite showtunes for the whole crowd to sing, or individuals bring along the sheet music to favourite musicals and jump up on the mic. Songs could range from West Side Story to Wicked, Hello Dolly to Hamilton, Dreamgirls to Dear Evan Hansen.

The Showbiz Piano Bar, featuring Trevor Jones as MC, pianist, vocalist, and compere (Programme Leader at NASDA) is where everyone is free to sing, relax and totally be themselves. This is the place where singing out loud is not only OK but encouraged! The place where you can request Disney songs and not feel embarrassed – in fact, everyone else probably wants to hear them!

The event will take place in the Gloucester Room at the ITR, with cabaret-style tables and full use of the bar. A fabulous opportunity to re-engage with the Showbiz Community at this fundraising event! – Doors open 7:00pm

He was the weekly host of Trevor’s Fab Fridays at the Butterfly Club until the end of 2016.Trevor lectured in Musical Theatre at the Queensland Conservatorium, Griffith University. He is a highly regarded musical director and professional appointments have included Musical Director of the 2016 Melbourne and Perth Productions of Avenue Q, Artistic Director of CitiOpera and Associate Musical Director and Head of Voice for the Victorian State Schools Spectacular. Other musical theatre credits include Dogfight (Doorstep Arts), 25th Annual Putnam County Spelling Bee (Vic Theatre Company), Next To Normal (Doorstep Arts), Titanic the Musical (Ballarat) and Dear World (Magnormous Productions).

He has performed to great acclaim in cabaret venues around Australia including Downstairs at the Maj (Perth), Chapel off Chapel (Melbourne), The Butterfly Club (Melbourne), La Boheme (Adelaide) and Slide (Sydney) with his shows “By Chance”, “Move On”, “Trevor Jones in Sticky Situations” “Kollision” and “Still Standing – A Tribute to the Great Piano Men”. Trevor’s performances bring a unique blend of humour, story-telling and song.

“If your idea of a perfect way to conclude a night out is a good old fashioned sing-along, New York style, hosted by a fun entertainer playing beloved show tunes with flair and pizzazz, then go” https://www.australianstage.com.au/201107244586/reviews/melbourne/late-night-piano-bar-with-trevor-jones.html

“A night where you will grin, sing, clap and dance your way to a musical theatre state of mind.” https://www.broadwayworld.com/australia-melbourne/article/FAB-FRIDAYS-with-Trevor-Jones-a-sing-along-salve-for-the-soul-20160211

“Trevor Jones is a National Treasure… or is that National Trevor?” https://www.outinperth.com/trevor-jones-piano-bar (from Downstairs at the Maj Fringeworld Performances Jan 2017

Tickets for this event are sold through PatronBase via the Showbiz Christchurch Website. 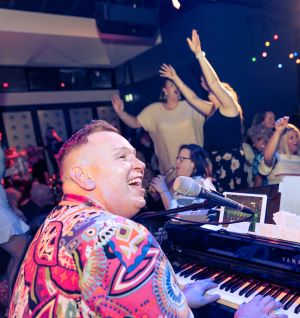