Experience the original ‘technicolour musical’ Singin’ in the Rain at the beautiful Isaac Theatre Royal in association with Ryman Healthcare.

This iconic musical- romantic comedy film was directed and choreographed by Gene Kelly and Stanley Donen.  Set in the 1920’s, the story follows life and technology in Hollywood as the transition is made from silent films to ‘talkies’. Popular silent film actors Lina and Don are repeatedly cast as the ‘romantic couple’, despite Don’s protests. However, as their latest film is being remade into a musical, they need the help of a diction coach. After much practise Don has the voice, but Lina still sounds terrible! That’s when a younger actress, Kathy is hired to record over Lina’s voice and becomes the real star of the film!

Singin’ in the Rain is regarded as the best film musical ever made and placed 20th on the 2017 list of the ’50 Greatest Films of all time’.  Whether reminiscing or seeing for the first time, this is a movie great not to be missed! 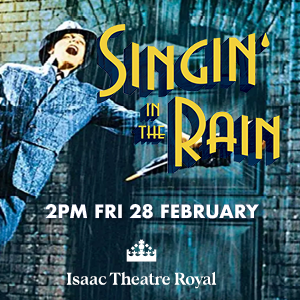