La Classique was founded in 1990 by its current director Elik Melikov. With its artistic ballet mastery, lavish costumes and magnificent stage sets, the illustrious la classique will take us on a mystical journey to the fairytale world of Princess Aurora the Sleeping Beauty.

The evil fairy ‘Carabosse’ casts a spell on the princess meaning she will die from a needle prick. The king banishes all knitting needles from the kingdom.

Princess Aurora is dancing with four princes on her 16th birthday. She pricks her finger on a needle hidden in a bouquet of flowers presented to her by the disguised Carabosse. She falls into a deep sleep. the whole kingdom is very sad.

‘Prince Deserea’ encounters the lilac fairy where he finds the princess of his dream, Princess Aurora the sleeping beauty…he kisses her gently back to life.

A fairytale party takes place and the whole kingdom joins in the celebration of Princess Auroras wedding to Prince Deserea.

Moscow ballet la classique invites the whole family to an evening of spectacular ballet bringing to life Tchaikovskys fantastically popular score. In this 2 act fairytale performance la classique will capture the imagination, the passion and the magic of Sleeping Beauty.

A hugely enjoyable dance spectacular for ballet lovers of all ages

“ The Set and backdrop were breathtaking and intricate, dazzling costumes only added to the magic of the fairytale story.” Waikato Times

“ Sleeping Beauty performed by Moscow Ballet “ La Classique” is a delightful and glittering performance . The brilliance of the costumes is outstanding “ 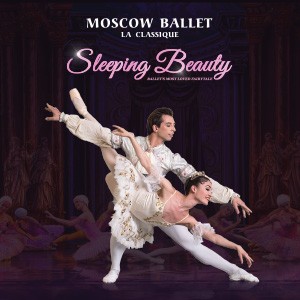