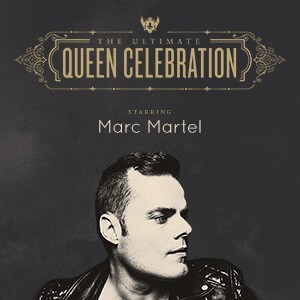 RETURNING TO DUE TO POPULAR DEMAND!

The closest you will get to hearing Freddie Mercury Live.  Over 125 million views online.

Christchurch, get ready to rock with MARC MARTEL, whose voice bears an uncanny resemblance to Freddie Mercury and whose vocals were used in the record-breaking biopic “BOHEMIAN RHAPSODY”.

No stranger to fronting Queen projects, Marc Martel was handpicked by Roger Taylor and Brian May to front their official Queen tribute in 2012.

Martel launched his own The Ultimate Queen Celebration project in March 2017. He has since provided vocals for the biopic “Bohemian Rhapsody”’; completed a hugely successfully inaugural tour of Australia and New Zealand; continued to perform to sold out concerts across North America, and has created an internet sensation with his live one take recordings of Queen songs.

THE 2018 ISAAC THEATRE ROYAL SHOW WAS A SELL-OUT – BOOK YOUR TICKETS NOW!

“Marc Martel is a vocal doppelganger for the Queen frontman Freddie Mercury.”

Running Times:
Times are approx. and subject to change at any time.